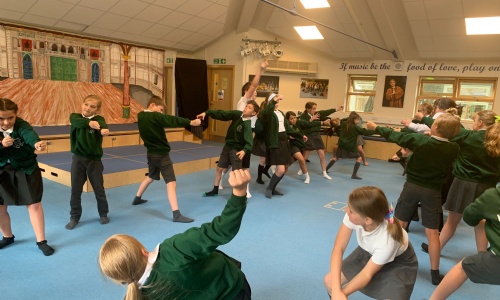 The play that must not be named!

Battlefields, murder, revenge and betrayal occurred this week in the studio when the G & T drama group were lucky enough to receive a workshop by Jo Stokes from As Creatives, on behalf of The Shakespeare Birthplace Trust. The studio was filled with battle cries, the snores of drugged guards, the threats of ambitious women and the sorrowful actions of a man who would never be the same again.

Weeks ago some of the G & T’s entered a Shakespeare competition, they had to respond to the quote “ To thine own self be true’ and only had one lesson in which to do so. The four groups we entered chose to respond either through improvisation, dance or song to show their understanding of the quote. Their entries were so good that all four groups  were lucky enough to go through to the second round of the competition which is a really impressive. On the 15th July they released the final results ….and St Peter's had the winning entry - beating 600 other schools. The prize - for the class - a workshop on Macbeth!

The group had an awesome afternoon learning more about Shakespeare’s Theatre and the story of Macbeth. They also got to use drama strategies and improvisation to explore the themes and character motivation in the play. It was an exciting workshop delivered by a really knowledgeable actress who truly excited all of us about Shakespeare and his stories.

Our entries to the competition are now part of the exhibition at all of the big Shakespeare heritage sites including The Globe and The Shakespeare Birthplace Trust in Stratford-Upon-Avon. What a feat to be able to say your drama, dance or song is part of an exhibition at The Globe. Make sure you check them out

I’d like to say a massive thanks to Oliver, Olivia K, Mia, Georgia, Will, Delilah, Olivia, Matilda, Katherine and Riley for their consistent hard work, creativity and commitment to the Arts, you and the rest of the G & T are truly exceptional, well done.