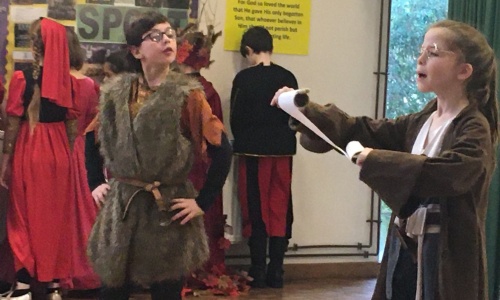 Here is our Shakespeare for Schools review of 'A Midsummer Night's Dream', from Mr B. Landeman, a former GCSE Drama Examiner.

Before a word was spoken, it was clear that this performance would be in a different league to those from earlier in the evening. Bright, imaginative costumes were exactly right for the play itself and for the bare, black-draped stage and the audience at once had something worth looking at. When that first word was spoken, like all that followed, it was clearly projected to even the furthest corners of the Theatre Royal. Now the audience was certain something special was about to happen. The opening speech by Theseus sets the tone for this play, supposedly written by Shakespeare for the wedding celebrations of a court noble, and the actor in this case created a sense of occasion. One could almost feel the audience leaning towards the stage in anticipation and they were to be fully rewarded.

It is rare to see Shakespeare performed well by young amateur actors, but this company rose effortlessly above any such modest expectations, taking the audience with them on a journey through this necessarily condensed version. Characters were clearly identifiable not just through costume and make up but through the ability of the actors to individualise them. The audience laughed in the right places and for the right reasons, whether prompted by a facial expression, a line of dialogue or a visual joke. The performers consistently demonstrated their understanding of the play and the needs of an audience through unwavering concentration and exceptional control of movements and of stillness when required, for instance in changing the setting from royal court to woodland glen to fairy kingdom by using their physical shape and positioning. Narrative links were effectively used to keep the audience in touch with the story and the use of song and music played live added to the richness of this production and echoed elements of the original seventeenth century performance.

This was a truly ensemble piece with equal importance given to all so it seems unfair to pick any individual performers out. However, the main source of humour in the play stems from the group of labourers known as the Mechanicals and they stand or fall on their Bottom. Here we had an actor prepared to take on this clowning role and play it for every laugh he could get and his success demonstrated the degree of confidence and competence shown by the whole cast only developed through hard work in rehearsals and excellent directing by their teacher, Ms Jayne Websper.